Prasad Pereira
Colombo, Sri Lanka
From the time I can remember, movies have had an inexorable pull on me. I make no apologies for this; for it is who I am, whether I, or anyone else, likes it or not. More than any other form of capitulation, it is the soft, silvery, dream-glow of the dancing shadows on that celluloid-splashed screen that have locked itself onto my heart and refused to let my consciousness function without it. All of life's trials, tribulations and triumphs, I sometimes fantastically, other times fictitiously, attribute to the movies. Most of my flights of auto-didactic fancy - from my knowledge of politics to business to science to human nature - I attribute to films I have seen, which have spurred me to read, discover and rediscover. I love the movies. My favourite film critic Roger Ebert once wrote that 'movies are not trivia.' I couldn't agree more. prasadpereira@gmail.com 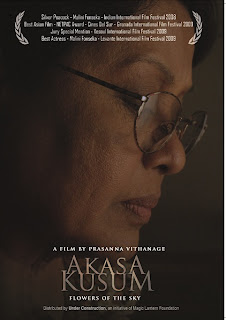 "Akasa Kusum" has just seen its DVD release in India, under the independent imprint Under Construction (UC).  UC is part of the Magic Lantern Foundation, an organization that promotes arthouse cinema in India and the sub continent.

The distribution deal for "Akasa Kusum" also includes two other films by Prasanna Vithanage, "Death on a Full Moon Day" and "Dark Night of the Soul".  All DVDs are available in Pakistan, Bangladesh and Nepal.
Posted by Prasad Pereira at 10:02 AM 545 comments: 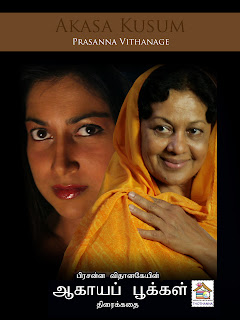 Ravi Ratnavale's Tamil translation of Prasanna Vithanage's original screenplay for "Akasa Kusum" will be launched on July 23 at the Library Services Auditorium.

Director Vithanage says "Azaya Pukkal" will most likely see its limited run somewhere in August 2010. The film was dubbed entirely in Chennai.
Posted by Prasad Pereira at 3:12 PM 199 comments: 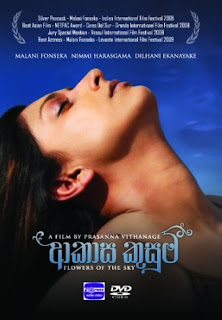 "Akasa Kusum" will see its DVD release on 17 March 2010 (Wednesday), at the National Library Services Auditorium on Independence Square. The disc has been visually remastered for its home video release and embellished with two versions of its soundtrack - in 2.0 and 5.1 surround sound, along with English subtitles. It will also include a range of special features, including deleted scenes, a mini making-of documentary and a gallery of posters and trailers.

The DVD will retail at the standard price of Rs. 750/- and will include the free giveaway of a copy of the "Akasa Kusum" screenplay by Prasanna Vithanage.

At the film's DVD release, there will also be a special forum on Sri Lankan cinema, featuring director Prasanna Vithanage, star Malini Fonseka along with two of the country's most prominent film directors, Asoka Handagama and Vimukthi Jayasundara, who will speak to the assembly and take questions. The forum will be moderated by actress Kaushalya Fernando. All are welcome to attend the event.
Posted by Prasad Pereira at 7:25 PM 118 comments: 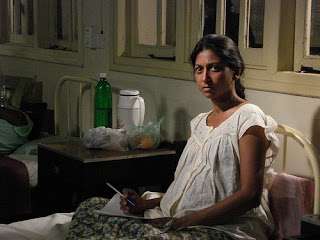 Nimmi Harasgama is set to introduce a screening of "Akasa Kusum" at the 12th London Asian Film Festival in March 2010. Malini Fonseka will also attend the festival alongside Harasgama, who will also participate in a Q&A session on the film.

Titled 'Tongues of Fire,' the festival also features screenings of blockbusters like "Chak De India," with Shah Rukh Khan and "Paa," with Abhishek Bachchan and Amitabh Bachchan alongside more distinguished projects like director Shyam Benegal's "Well Done Abba" and "Lovesongs," featuring Jaya Bachachan in her first screen role in over a decade.

"Akasa Kusum" screens on Tuesday, 9th March at the Apollo Cinema in Piccadilly. Harasgama, who recently was named by Zee Magazine as one of six up-and-coming Asian actors in England, will give the introductory speech before the screening.

The film is currently being prepped for a Sri Lanka DVD release by director Prasanna Vithanage. The disc was scheduled to arrive in stores in February, but will see a slight delay to March.
Posted by Prasad Pereira at 4:22 PM 42 comments: 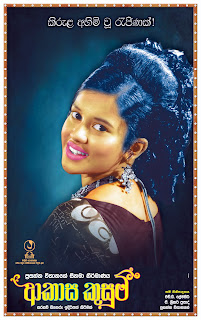 The domestic DVD release of "Akasa Kusum (Flowers of the Sky)" is set for mid-February 2010, through Torana Music Box. Director Prasanna Vithanage revealed that the DVD release will feature a newly remastered version of the film, complete with 5.1 surround sound.

The disc will also contain bonus features, including a 'Making-Of' documentary, deleted scenes, trailers and the Akasa Kusum music video. The film ran for 77 days in Sri Lankan cinemas last year, to critical and popular acclaim.

Meanwhile, Vithanage is also busy with a special Tamil dub of the film, on which he is currently working in India. This version is to see a special limited release in Sri Lanka in April, in time for the Sinhala & Tamil New Year. "Akasa Kusum" star Malini Fonseka has been acclaimed internationally for her performance in the film winning numerous awards in the international film festival circuit.
Posted by Prasad Pereira at 2:46 PM 29 comments: